Former hairdresser Heidi Lawson has styled a new career path after graduating with a Bachelor of Laws at the Rockhampton graduation ceremony last week.

The former Rockhampton business owner thanked CQUniversity law lecturers, many of which were her hairdressing clients at the time, for their encouragement to start the degree back in 2013.

She also identified her involvement as a Native Title Applicant as a pivotal moment that allowed her to see how working in the law could make a difference to ‘her mob’ and others.

“I bought my first business at 21 years of age, just after the completion of my hairdressing apprenticeship,” Heidi explained.

“The salon I bought was on the CQUniversity campus in Rockhampton. I thoroughly enjoyed running my own business, styling and colouring my wonderful clients’ hair, who over the years I had become good friends with.”

After a few years of running her own business, Heidi became more involved with her mob, Jiman (also spelt Iman, Yiman), from the Tarroom and Wondoan areas, as a Native Title Applicant where she helped negotiate Mining Agreements and Cultural Heritage Agreements.

“My mob then allowed myself and other Jiman applicants to negotiate business, education and training development plans on various steering committees within the mining proponents and government agencies for our people.”

Heidi said this work involved a lot of legal application and knowledge which she became passionate about studying in order to have a better understanding to negotiate for her mob.

“I was fortunate enough to have known the late Robert Fisher, a CQUniversity law lecturer. He was a client of mine at the salon. He was one of the people who encouraged me to study the new Bachelor of Laws at CQU.

“Lawson Smith, Wayne Jones and Jo Kehoe, also clients at the time, encouraged me to look at the degree. Jo even gave me some textbooks to read.”

Heidi began her degree in law back in 2013 and over the years while studying part time has received help and support of individual university staff and also through the Indigenous Tutorial Assistance Program.

“I was not worried to say ‘I don't understand’ or ask ‘can you explain it in a different context’. I'm very grateful to have had access to the tutoring program, as it was definitely one of the main contributors to me completing my degree.”

During her degree, her mob was successful in receiving their Native Title Determination from the Federal Court – one of the oldest Native Title Claims.

“This was a great day for our mob as it all started when my Grandfather John Lawson and Uncle Fred Tull were young." 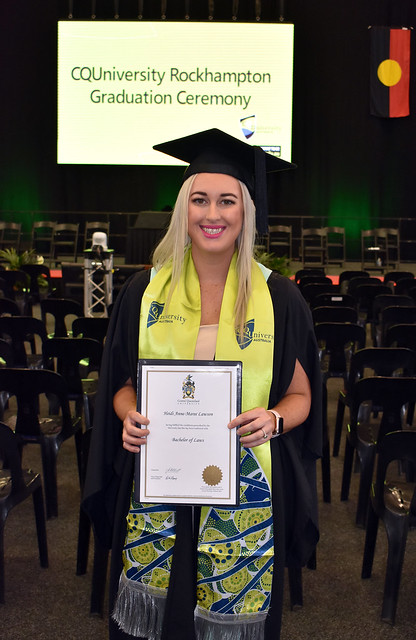 During her degree Heidi had to overcoming many challenges including becoming a first-time mum to her daughter Thea and moving to Brisbane after her husband had to relocate for work.

She is currently looking forward to more study, possibly a Masters qualification, and working either in criminal or Native Title law within government.

Heidi credits her time with CQUniversity in giving her much more than a degree, but a package of life skills.

“It was a challenging degree which required absolute dedication and to have the ability when doing assessment work to write clearly and persuasively.

“I also have found throughout the degree it improved my public speaking skills.

“Some lecturers, in particular Manjo Oyson and Associate Professor Christoper Walsh, have structured their programs so well for CQU students, in developing great public speaking and communication skills when speaking on legal issues.”